By Dr. James Gels, from the Coach’s Clipboard Basketball Playbook
This is a defensive drill that emphasizes defensive slides, forcing the opponent to the baseline, and then trapping at the baseline.


Setup: (blue = assistants, red = defense)
Use both sides of the half court, with an assistant holding a ball on each wing, free-throw line extended. He/she should hold the ball extended out with one hand toward the defender (X1).

The Drill:
Diagram A. The defenders at the free-throw line (X1 and X2) slide over and back twice and touch the ball each time, being vocal ("deny, deny, deny"). On the third slide, before she can touch the ball, the assistant puts the ball on the floor and starts dribbling. The defender forces him to the baseline, where the low block defenders (X3 or X4) seal off the baseline and prevent further penetration along the line, and the two defenders trap him in the corner, or along the baseline (Diagram B).

Pointers:
1. Make sure the defense prevents penetration along the baseline.

2. Don't allow the ball-handler to split the trap. Trappers get "knee to knee".

3. When trapping, don't reach in. The height of the trappers' hands should mirror the height of the ball. We are going for a deflection, a bad pass, a 5-second call and lastly the tie-up and jump ball. If the offensive player presents the ball to you, go ahead and get the tie-up, jump-ball... but otherwise, don't reach-in for the ball. 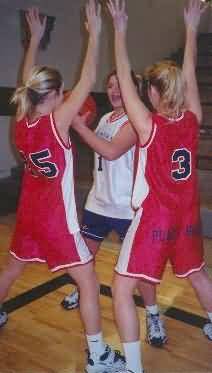